So far this feature has focused on books devoted to classic film but I just couldn’t pass up an opportunity to read and review Twitch Upon a Star: The Bewitched Life and Career of Elizabeth Montgomery.  Bewitched is up next to I Love Lucy as being one of my favorite shows and I always found Elizabeth Montgomery to be a genuine and fantastic actress who I never realized did so much outside the series.   I always take note of whether the author seems to enjoy the person their discussing and you see that here.  Author Herbie J. Pilato presents a comprehensive and touching biography of Montgomery’s life from her tempestuous relationship with factor, actor Robert Montgomery, the formation of Bewitched and her various marriages.  Fans of classic television or of well-written biographies should seek this out November 5th! I really had to condense my notes, A) Or risk this review becoming a cavalcade of “Hey I didn’t know [insert fact]” and B) To give you a reason to read it.  At 472 pages Twitch Upon a Star is comprehensive and encompasses Montgomery’s entire life.

A major theme focused on throughout is her relationship with her father Robert.  I’ve never seen any of Robert Montgomery’s work and actually didn’t connect the two as father/daughter beforehand.  The book looks at the tempestuous relationship between father and daughter from their disagreements on politics to their rivalry over who was more well-known (sadly it’s sad Robert envied his daughter’s popularity).  In spite of that the book does presents an otherwise loving relationship between the two.  Her father demanded excellence of her, never using his name to help Elizabeth gain an advantage and refusing a role on Bewitched as her father (although she later said having the last name Montgomery helped).  The quotes attributed to Montgomery about her father are loving and genuine.  Despite her father being a “larger than life” figure in films he was always Daddy no matter what (34).  Overall Robert Montgomery presents a sad figure in the story, never truly getting over the death of Elizabeth’s sister Martha.  One place Elizabeth never felt she measured up was in being as good as Martha.  The book includes wonderful stories from celebrities about the two Montgomery’s including a touching tale from June Lockhart.  It’s apparent the back and forth relationship the two had but Pilato does have a bad habit of including quotes about the Montgomery relationship, early on in the book, debating whether they got along or not.  I understood their relationship dynamic and at times these throwaway quotes feel as if Pilato didn’t want to return to that particular section and include them.

Montgomery grew up being Hollywood royalty, hanging out with James Cagney and Bette Davis but, in the case of Cagney, never knowing who they were!  She also socialized with Dominick Dunne and William Daniels throughout her life, none of which I knew.  No matter what Elizabeth never let that give her a large ego.  She simply wanted a normal life that she never truly possessed, having to dress properly and constantly act for any given situation.  It was a child that Elizabeth grew to love animals as her house was filled with pets.  For a privileged young lady you never feel like Elizabeth Montgomery was anything more than down to Earth.  As a child she didn’t even want to be an actress but a Walt Disney animator (have I mentioned I love her?).  The picture section is fantastic in showing Elizabeth growing up in this privileged background and includes a photo with her father showing a stark family resemblance.  The book does feel the need to include the entire Montgomery genealogy and I’m all for compiling any and all information but it comes off like a boring list of family names and dates.  It’s noticeable most in the beginning and towards the end when Montgomery’s third husband Robert Foxworth is mentioned.  In that section in particular it’s almost like we’re seeing Foxworth’s resume.  Other moments, like detailing Elizabeth’s school as a child, just feel like excess. 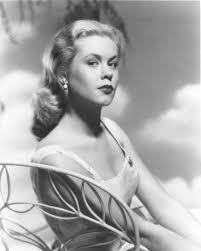 There’s not much salacious gossip although the book does mention possible rendezvous with Gary Cooper and Dean Martin.  All three of her marriages are covered in-depth.  Her marriage to Gig Young was not approved by her father although the two were seen to be similar.  Young had numerous issues with alcohol and constantly felt old compared to Montgomery herself.  I’ve only seen Young in one film (Desk Set) and I’m fairly shocked at the reading of the type of man he was; ultimately killing himself and his wife!  Thankfully there’s happier relationships covered in the book, the key one being her relationship with William Asher.  Asher was also born into Hollywood and a prolific director (he helmed the I Love Lucy with William Holden before Bewitched).  Throughout their marriage it was happy although they had their problems, eventually divorcing.  The book looks at the sweet ways Montgomery’s pregnancies were written into the series and the book doesn’t harp on Montgomery’s divorce from Asher.  It is alleged that Montgomery was willing to keep going with Bewitched without her husband (replacing him with her lover at the time Richard Michaels).  Compared to other biographies that try to force connections between an actor’s roles and their personal lives Twitch Upon a Star does this but logically which I appreciated.

Of course the bulk of the book looks at the creation and duration of Bewitched, a series that still endures to this day. I mentioned briefly in my review of I Married a Witch that this show as inspired by it.  There’s still a lot of debate on that with some members of the production saying yes and others, like this book, saying no.  The show did have copyright issues with I Married a Witch but William Asher maintained he’d never seen it.  All the aspects of the show’s formation and production are covered from casting to filming.  The two Darrin’s are looked at (with the assertion that Dick York loved Montgomery which caused the two to butt heads).  Apparently there were issues between Montgomery and Agnes Moorehead with Montgomery always being the smart-ass during their disagreements.  Moorehead definitely comes off a bit tempestuous, even making Dick Sargent cry at one point.  Pilato does try to connect Bewitched into the popular consciousness of the 1960s and while he does a good job for the most part his attempt to tie this show up with the Beatles is a stretch.  Of course one can’t forget Elizabeth’s infamous nose twitch.  Uniquely this isn’t beaten into reader’s minds.  An integral piece of the show is boiled down to being something Montgomery could do.  It was a normal thing for her that didn’t define her or her character Samantha which I respected.  Finally the book discusses the feud between Bewitched and I Dream of Jeannie, two shows that focused on supernatural females.  At one point producer Sidney Sheldon was accused of stealing ideas from Bewitched to use for Jeannie.  Pilato goes so far as to include letters, originally published in TV Guide debating Samantha and Jeannie (one excoriating Jeannie as anti-feminist).  There was intentions to do a spin-off to Bewitched I never knew about called Bewitched Again about a new couple who encourage the use of magic.  Montgomery would have guest-starred but the financing was lost and the project shelved.  I honestly wouldn’t mind seeing that idea resurrected in some way.  Apparently Montgomery was sad she never won an Emmy for her time on Bewitched (a travesty in my opinion) and Pilato presents various theories on why that might have been.  Her father never won any major awards either and I chalk this up with Hitchcock never winning an Oscar for Best Director.

There’s just so many fantastic stories in this book I wish I could discuss them all from Elizabeth’s heartfelt love for a seeing eye dog named Emma that will make you sob (unless you lack a heart).  Quotes from friends of Montgomery’s including Sally Kemp and Cliff Robertson all show how beloved Montgomery was.  Montgomery herself has some fantastic quotes about acting and there’s wonderful stories about her interactions with people with disabilities.  Sure Pilato makes a few general mistakes when not discussing Bewitched (like citing that the remake of Guess Who’s Coming to Dinner starred Will Smith or that Rosemary’s Baby was about a coven of witches) but who cares?  The rest of the book focuses on a beautiful, gracious woman who made people smile and understand it was okay to be quirky.  I recommend Twitch Upon a Star.  It’s an insightful read about an amazing woman!  It hits bookshelves November 5!

6 thoughts on “Old Hollywood Book Reviews: Twitch Upon a Star” Leave a comment ›